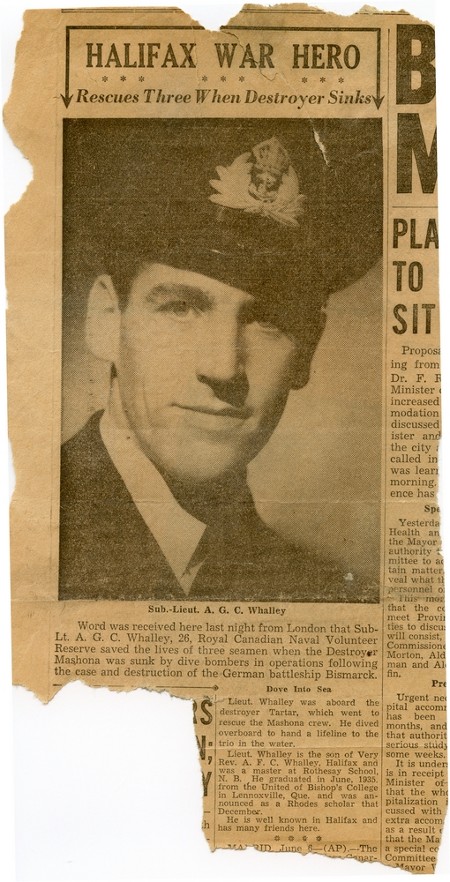 Welcome. This website is an introduction to George Whalley (1915-83), the eminent and accomplished Canadian man of letters. You may read samples of Whalley's works, including his prose and poetry, and listen to some of his recordings. You may view photographs from his childhood to the last years of his life. A link to the National Film Board website will allow you to see The Living Stone, an award-winning film he narrated. The bibliography records the impressive range of works he produced. The links to websites for the archives at Queen's University and the University of Toronto show the records of his letters and papers at those institutions. Additional materials will be added to this website as the work of exploring Whalley's remarkable life and writings continues.

George Whalley was a scholar, poet, naval officer and secret intelligence agent during World War II, CBC broadcaster, musician, biographer, and translator. He was a leading expert on the writings of the poet and critic Samuel Taylor Coleridge. He served in the Royal Canadian Navy Volunteer Reserve 1940-56 and was on active duty in the Royal Navy 1940-45. During World War II, he served on warships, participated in the pursuit of the German battleship Bismarck, saved a life at sea (for which he was awarded a Royal Humane Society Bronze Medal), worked as a naval intelligence officer, designed an acoustic beacon (the FH 830) used during the Sicily landing in 1943 and the Normandy landing in 1944, secretly tested surfboats used to land Allied agents in Europe covertly in preparation for the invasion of Normandy in 1944, rescued survivors from the ruins of the London bombings, and courted and married Elizabeth Watts. He taught English at Queen's University 1950-80 and was twice the head of the department. He was elected to the Royal Society of Canada in 1959.

In his lifetime, Whalley published two books of poetry, Poems 1939-1944 (1946) and No Man an Island (1948); wrote 3 books, Poetic Process (1953), Coleridge and Sara Hutchinson and the Asra Poems (1955), and The Legend of John Hornby (1962); edited or co-edited 11 other books, including Writing in Canada. Proceedings of the Canadian Writers’ Conference, Queen’s University, 28-31 July 1955 (1956), A Place of Liberty: Essays on the Government of Canadian Universities (1964), Death in the Barren Ground: The Diary of Edgar Christian (1980), and the Marginalia for The Collected Works of Samuel Taylor Coleridge (1980-2001); published over 100 scholarly articles and critical reviews, along with an additional 18 imaginative and miscellaneous pieces; and wrote or adapted over 60 scripts for the Canadian Broadcasting Corporation and the National Film Board.

After his death, Brian Crick and John Ferns edited a selection of his essays, Studies in Literature and the Humanities: Innocence of Intent (1985), Michael Moore published George Whalley: Remembrances (1985), George Johnston assembled The Collected Poems of George Whalley (1986), and John Baxter and Patrick Atherton published his translation of Aristotle's Poetics (1997). In 2016, Michael John DiSanto edited The Complete Poems of George Whalley. Informed by a life intersecting with important Canadian historical events and constant intellectual inquiry, Whalley's remarkable range of work ranks him with other important Canadian thinkers such as George Grant and Northrop Frye.

Read the essays written by John Ferns (Professor Emeritus, McMaster University) for an overview of Whalley's life and for introductions to his Coleridge scholarship and poetry.

George Whalley's essay, poems, photographs, and poetry readings are published with the permission of the Whalley Estate. The three essays by John Ferns are printed with his permission.

This website is edited by Michael John DiSanto and produced by Robin Isard, eServices/Systems Librarian from the Wishart Library at Algoma University.